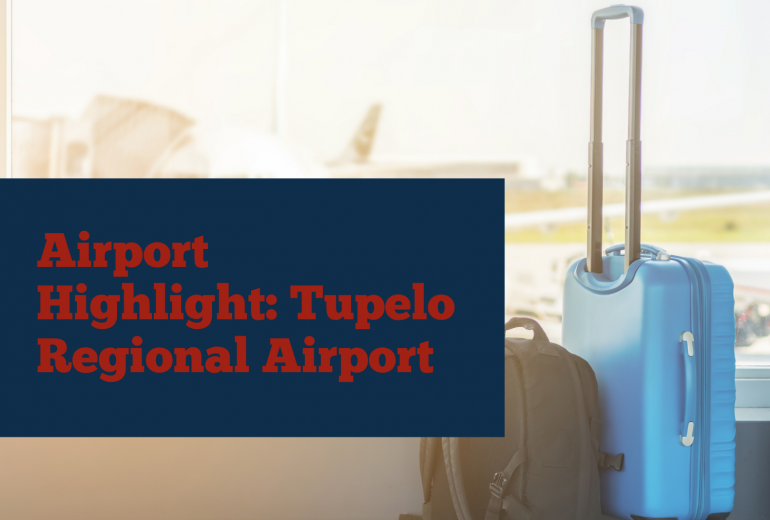 Nestled in the Appalachian foothills that make up North Mississippi’s Hill Country lies a micropolitan most famous for the birthplace of a musician by the name of Elvis Presley. Tupelo, Mississippi is nicknamed the Cradle of Rock n Roll thanks to its most famous former resident, but that’s not all there is to enjoy about Tupelo. Just a few miles west of Downtown Tupelo is Tupelo Regional Airport, the largest and most vital airport in North Mississippi.

Serving thirteen counties ranging from Alcorn and Tishomingo counties in the north to Lowndes and Oktibbeha counties in the south to Yalobusha county in the west, Tupelo Regional Airport has grown immensely since its inception in 1951. Though the airport is more than 65 years old, it has continuously undergone improvements and renovations over the years. In 1991, the runway was extended to 6500 feet with 150 wide grooved pavement. Other improvements include a new full lighting system, air traffic control tower, new overlay on taxiways, a fire station, new parking lot, and a new security system.

These improvements have established Tupelo Regional Airport as a major and vital airport for Northeast Mississippi. The Mississippi Department of Transportation has declared Tupelo Regional a business airport with statewide impact. The airport offers 202 jobs to the area and has an economic impact totaling more than $14 million. The airport lies 35 miles east of Alabama and 50 miles south of Tennessee making it the perfect location for a transportation hub.