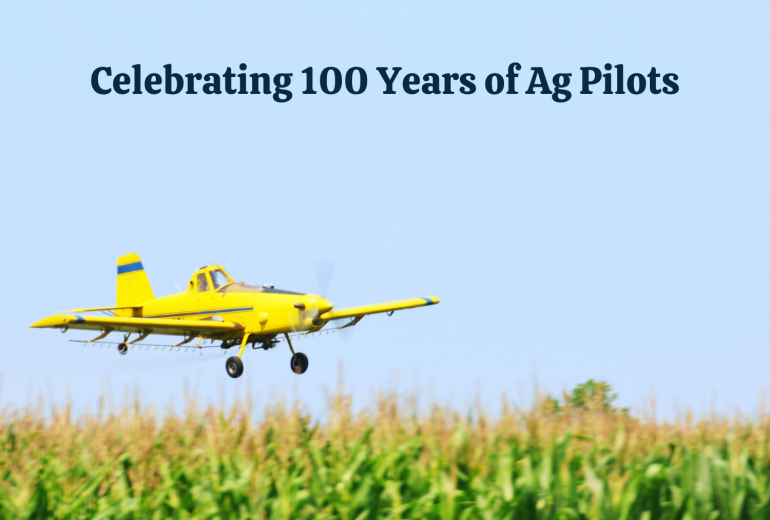 Most of us have watched an ag pilot, or crop duster as they were once known, swoop across a field, a spray of pesticide or fertilizer emitted from its hopper. But how much do you know about these pilots who protect crops and so much more?

The first crop duster started as an experiment a hundred years ago in Ohio. The term crop duster was applied because the planes distributed dry chemicals onto the crops below. Today aerial applications use equipment to apply seed, and mostly liquid fertilize, and insecticide with amazing precision.

Not just any aircraft and not just any pilot can do the job of aerial spraying. Ag aircraft are built to handle between 30-100 takeoffs and landings every day, often from their own private landing strips which aren’t the smooth paved strips of commercial airports. Ag pilots have a commercial pilots’ license and must be registered as a commercial pesticide applicator. They are highly trained professionals whose job is considered one of the most demanding pilot jobs outside of being a fighter pilot.

New technology allows aerial applications to reduce off-target drift. Not only does this keep their products where they want it, it reduces the overall amount of pesticide use and allows the pilot greater fuel efficiency.

Finally, ag pilots aren’t just plunging into a field, spraying a field, then sweeping over the trees and highways for a quick turn around to do it all again. They also aid in fire fighting and combatting those aggravating and disease-carrying mosquitoes we have so many of in Mississippi.

This year we celebrate with our ag pilot friends as they commemorate the 100th anniversary of that test flight in Ohio in August of 1921. And when you see one of those daring plants zoom from a field over the highway, you’ll know there’s an incredible professional behind the controls. And if you’ve ever considered your options for careers in the aviation industry, consider being an ag pilot. With 127 million acres of cropland treated aerially each year, there’s plenty of work.

Facts about the Aerial Application Industry