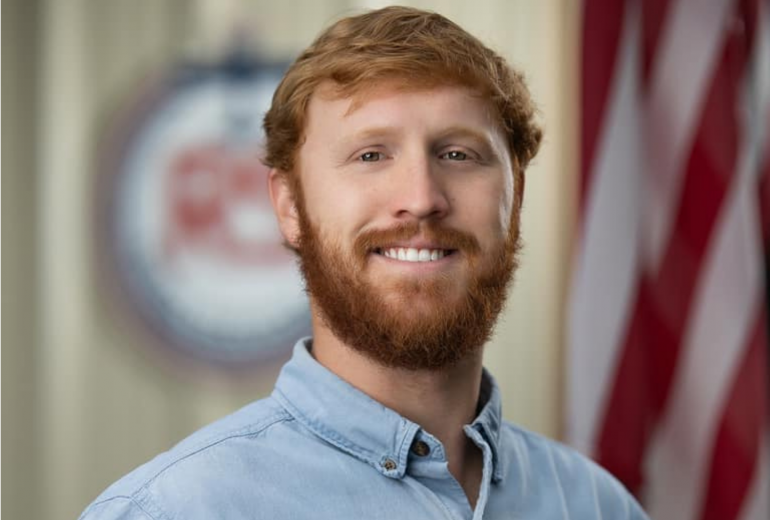 If you work at Rebel Services, you’re family, whether your last name is James, you have red hair, or just because. Today, though, we’re highlighting one of our employees whose last name happens to be the same as our owners.

Cody is the first-born boy of Tommy and Margie James and is the first outlaw in the “James Gang” as most folks refer to the bunch.  He is also one of the first employees of Rebel Services and often performed tasks while in school after football practice to make gas and spending money for the weekend.  Some tasks performed by Cody with several football teammates to earn some money involved separating and filing receipts (not his favorite), sweeping floors, loading and unloading inventory, cleaning, welding, painting, and literally anything anybody could think of – no matter how messy!

Like a lot of other people, Cody James, Rebel Services Shop Manager, and Lead Technician tried his hand at a couple of careers before finding his way back to the family business. After a great high school football career, he signed to play football at Delta State University. He re-evaluated that choice after three semesters, a couple of concussions, and dealing with the “Delta crud” and becoming a steady boyfriend to Abby, a “home” girl.  He then chose to focus on welding instead of football.

Cody was accepted to the welding program at ICC, Fulton, MS where he learned about Underwater Welding, which spurred an interest in diving. He completed the program at ICC and was accepted at the Commercial Diving Academy in Jacksonville, Florida.  He went on to complete the Commercial Diving Academy and accepted a position with Chet Morrison, an offshore dive company based in Houma, LA. Working offshore with many different people and working his way from a red hat to a white hat and enjoying the unpredictable weather of the ocean life was unlike Cody had ever imagined.  Even though he was hard-working, moving up the ranks, and enjoyed his job and the company, being away from home for two to four weeks at a time was hard on him and his family especially when a loved one was ill.

Cody returned home to Ripley, Mississippi, joined Team Rebel full time, and married his ‘home” girl Abby Carter.  He put his welding skills to good use every day and begin fabricating skids, sump savers, catwalks, and other specialty items. Because of Cody’s extensive experience and history with Rebel Services, he was able to jump in and offer time and money-saving ideas for both the company and customers.  Cody is so versatile he can perform onsite welding and/or service work, shop fabrication, and maintain fabrication management.  Regardless of where he is, his day usually starts with a couple of cups of coffee and a work order check-in.

One of the biggest lessons he’s learned is sometimes the most complicated problems have the simplest solutions. Cody and our team had a short window to complete a pumping skid for a company in the Carolinas a few years back. He traveled to the site several times trying to solve a problem with the skid. In the end, the solution turned out to be a five-dollar valve.  He shares this story when asked with the biggest grin!

When he’s not behind his welding helmet, he’s usually working on his house and land or riding horses. He spends a lot of his time away from work with his wife, two cats, and dogs Rip and Roxy.  He’d hoped Rip, named after the character in Yellowstone, would be a tough guard dog but he’s turned into a people-loving softy instead-but looks intimidating. And even though Cody works with his family every day (mom, dad, sister, and brother), he still spends a good bit of his free time with them too.

Remember how we said our Rebel Services employees are like family regardless of their last name? That’s Cody’s favorite thing about this place. Our team has a camaraderie that’s hard to beat.